The much publicized protest scheduled to hold tomorrow, Monday, 6th of February has been canceled.

2face Ididia through his Instagram page announced the cancellation of the protest in a video he posted.

“Dear Nigerians, due to security concerns and public safety consideration, I hereby announce the cancellation of the march.”

According to the singer the protest is under serious threat of hijack by interests not aligned with the ideals of the march.

The singer explained that the protest which Nigerians were desperately counting down to was canceled due to security reasons.

While some Nigerians understood the hard decision he’s met with, some weren’t happy about the development and have said they will continue the protest with or without 2baba.

Read their reactions below:

@official2baba what the fuck is this…. we no gree we coming out fully on monday 2baba or no 2baba , we are nigerians we fear no foe

@official2baba Baba it’s no longer in your hands, we are hitting the streets on Monday regardless.

TIME!!!
We must hit the streets Monday as planned, enough is enough

@official2baba Don’t worry! You’ve don’t you part! The Protest will go ahead as planned, people already mobilized themselves and printed…

@official2baba its clear you cant start this revolution. We appreciate you, but this protest is above you now. ALUTA CONTINUA

This morning vs This evening. 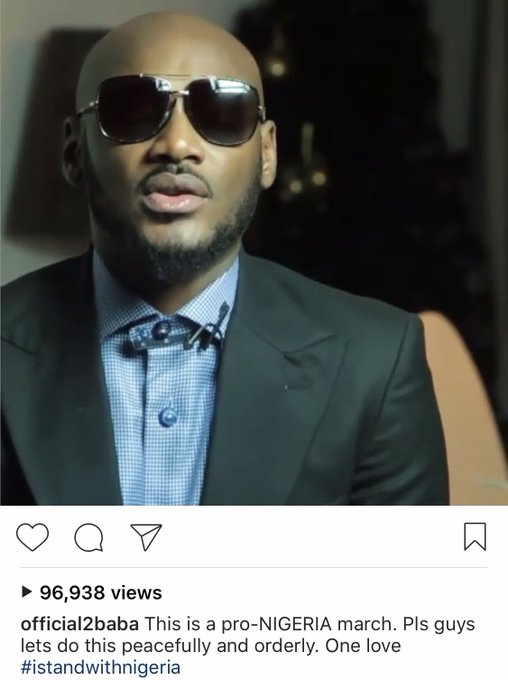 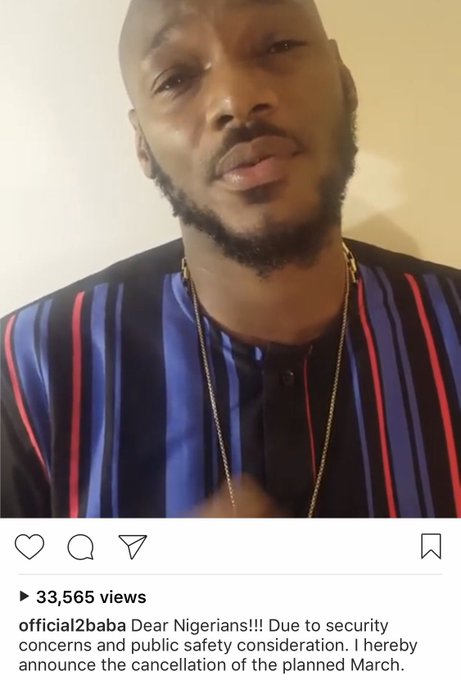 @official2baba Posters already! I understand the pressure you’re under, you shouldn’t have cancelled but we stand with Nigeria regardless

@official2baba chai.. God will not forgive you for this. Smh

@CuteTgurl @official2baba that is not fair! Any idea what threat he has faced?

@official2baba chai.. God will not forgive you for this. Smh

@CuteTgurl @official2baba that is not fair! Any idea what threat he has faced?

@xvnthe @CuteTgurl @official2baba anyone planing a protest should be prepared for such threat.. No excuse at all.

@official2baba I knew this guy gonna chicken out. I knew it. Romania got a better deal not long ago. Go check it yourself. Why can’t we?

@official2baba I hope no threats were involved in making this decision. The days are already numbered. It’s the beginning

@wollyp1 @official2baba
There can never be another Fela.
Shebi he collect Prado from Akpabio as wedding gift
Bloody hypocrites

@official2baba what the fuck is this…. we no gree we coming out fully on monday 2baba or no 2baba , we are nigerians we fear no foe

@official2baba history will remember you as a great artiste. But all of this political stuff will be recorded as an L.

@official2baba be like I rather stay alive than to die for Nigeria pic.twitter.com/zcHqw0WDsJ

@official2baba How would you be remembered in history? This is a time to take a stand against evil in our country
Owoicho is your strength

@official2baba Interesting and good decision taken. kudos to those who gave you the right advise to cancel the protest.

@official2baba this is Sad, why do we need to cancel a peaceful protest In a Democratic nation Why can’t I say it’s enough Why can’t I march

@official2baba You ought to be ashamed of yourself for letting them buy you over. Posterity will remember your shame! #shameless

@official2baba Hmmmmm so they have threatened you to the extent where you cancel the protest? Nigeria has been clammed down

Video Of The Week

Song Of The Week – Amin by Jvson